"Blog" is the latest attempt to make happenings at  Clayton Bay Boat Club more accessible to members and potential members.

The boating season has come to an end and while boaties now engage in the completion of winter maintenance, they can also reflect on a season of both racing and cruising on the beautiful waters surrounding Clayton Bay.

In September, 8 boats embarked on a cruise to the destination at Currency Creek, where mooring jetties, a fire pit and a shelter shed make for superlative cruising/camping.

The season opened on the October long-weekend with the traditional sail-past and Tom Bentley Trophy Races and the first of the Red Top Regatta Races on the Monday.

Red Top Regatta is a monthly event normally held on the Saturday and Sunday of first weekend of each month and culminating with the Monthly Barbecue at the clubrooms.

In October six boat were loaded up onto trailers for the long drive to Coffin Bay.

Boats were berthed at the Coffin Bay Yacht Club for the duration of the cruise – approximately 6 days with several great sails out to the Brothers, Bulldog Beach and Mt. Dutton Bay with excellent happy hours and dinners at both the Yacht Club and restaurant 1802, making the long drive worthwhile.

The summer saw the continuation of the Racing Program as well as an overnight cruise to Deep Creek during a particularly warm spell that saw the deployment of ‘Floyd the Flamingo” (above) with several crews taking to the water to cool off!

In March, a 3-day trip to the Coorong was planned with about 17 boats making the trip through the lock at Goolwa and up to a great anchorage at Panmarung Point opposite the Tawitchery Barrage. Perfect warm weather during the day enhanced the trip and necessitated shade sails and umbrellas but the evenings were cool enough for a fire.

Two years ago, we’d planned a Club cruise on the Murray between Renmark and the Customs House at Border Cliffs beyond Lock 6. Keren and Rob had reconnoitred the river for camping spots and resources and we were all set to go when Covid hit!

But in April 2021, the trip was reprised and 14 members and two guests in six, mastless trailer-sailers and one houseboat, moored outside of the Renmark Club on Monday 26th April where a splendid dinner was enjoyed prior to our departure the next day, upstream to Hunchee Creek.

Highlights of the seven-day trip included a visit to the Woolshed Brewery, evening spas on the houseboat, followed by fireside happy hours. Spectacular weather in the high twenties most days produced superb sunsets. The transit of Lock Six was a highlight as was the historic Customs House and several boats took the opportunity to dip across the SA \ Vic border just upstream from the Customs house. Morning coffee, courtesy of Barista Rob on the houseboat became a pre-start ritual each morning throughout the trip.

A very successful adventure that could become an annual event!

Winter is well and truly upon us, but since June 21st the days are lengthening once again!

The Presentation and Bingo Night is on Saturday 31st July and the Annual General Meeting on Sunday 8th August.

The former celebrates the achievements and efforts of members throughout the year with, no doubt, a certain lightness during the Bingo sessions.

The latter includes the AGM and two Special General Meetings.

The AGM offers members an opportunity to learn about the ways in which the club has been managed during the year and also to vote on reports as well as electing the new committee.

The first Special General Meeting is to review the Rules of Association and the second to vote on a proposal for life membership.

Both of the general meetings and the AGM are important for the continued running of the club, so please try to attend or complete proxy or on-line voting forms.

On Monday 26th  Ric and Al (Bad Dolly), Brian and Tania (Blasé), Ray and Alison (Optimist), Greg and Meredith (Ali Cat), Mike and David  (Annie V) arrived having travelled from Clayton via Karoonda, Loxton and Berri. Renie and Gavin (Sundowner) had travelled up to Renmark on Sunday April 25th, Anzac Day. They were the first to survive the bitterly cold Riverland night.

Boats launched at the Big Four Ramp before proceeding upstream to moor in the pens outside of the Renmark Club.

Keren and Rob and their friends Meredith and Nick joined the fleet after picking up the houseboat “Little Gem” from Paringa and traversing the Paringa Bridge during the appointed daily half hour from 1430 to 1500.

All boats were safely moored right outside of the Renmark Club at the very convenient Renmark Wharf by 1600 and within half an hour happy hour began on the top deck of “Little Gem.”

A gallery of pictures of our trip can be seen below:- 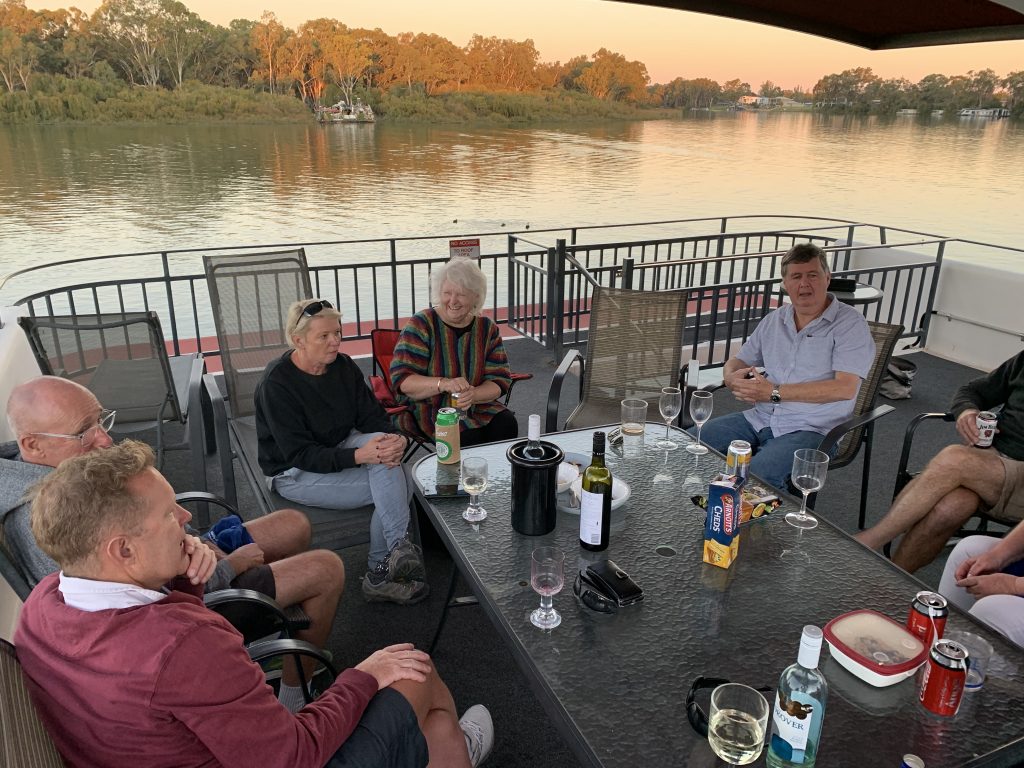 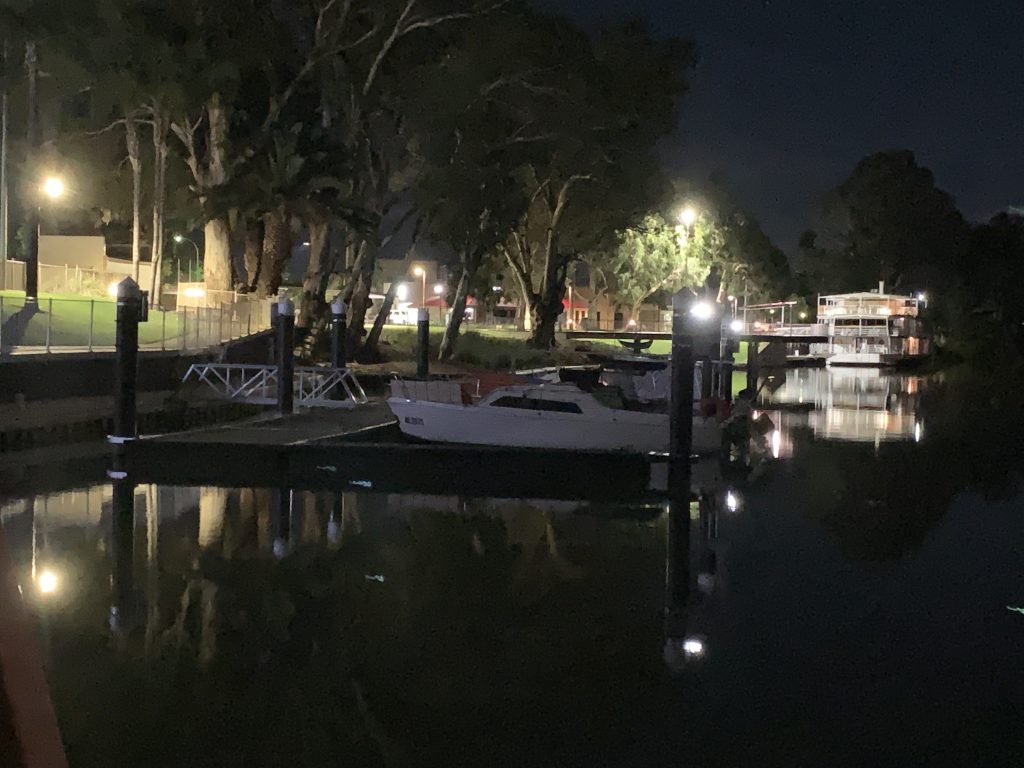 Following a very pleasant happy-hour on the upper deck of ‘Little Gem’ with the super moon rising above the trees across the river and ‘Chook Man’ playing steel guitar music in accompaniment, the group assembled at their table in the Renmark Club for a delicious First Night Dinner.

Tuesday morning saw a few of our group investigating the local café and supermarkets for heart-starters and last minute supplies. The Rootsey’s returned to their boat with an aluminium ladder! This wasn’t such an odd purchase since it facilitated easy disembarkation and boarding from the river banks during the trip.

The group set off from Renmark at about 0930 headed for Hunchee Creek, about 592 km from the mouth of the Murray. The Dales arrived first and chose an excellent mooring with plenty of walking tracks and both space and dead timber for a campfire. Tania quickly had the fire blazing and chairs were positioned for an evening of soporific gazing and very pleasant conversation beneath a canopy of River Redgums. 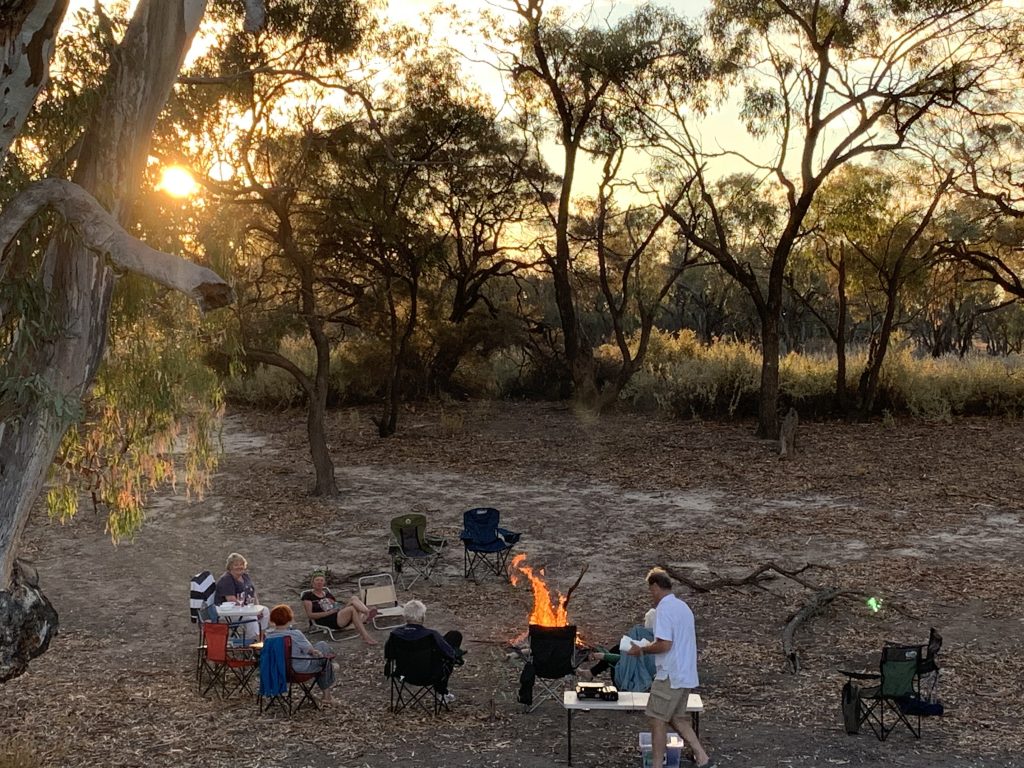 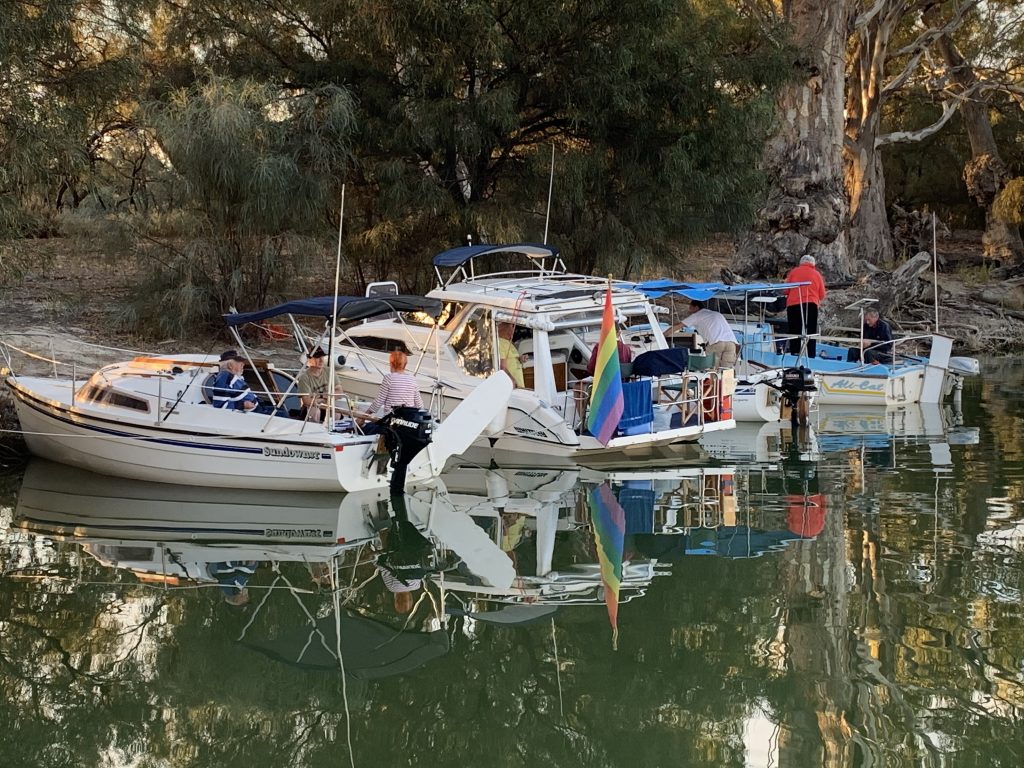 Wednesday and a short run upstream to the Woolshed Brewery. Since it didn’t open until 1100 a fairly relaxed morning and late start saw us on the river by about 1030 and moored outside the brewery by lunchtime. 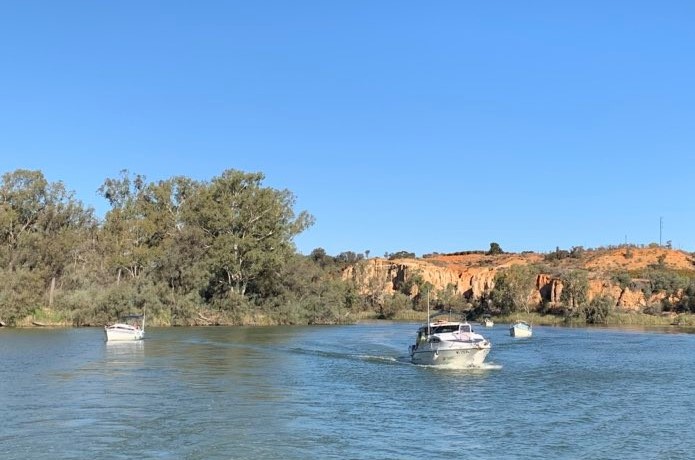 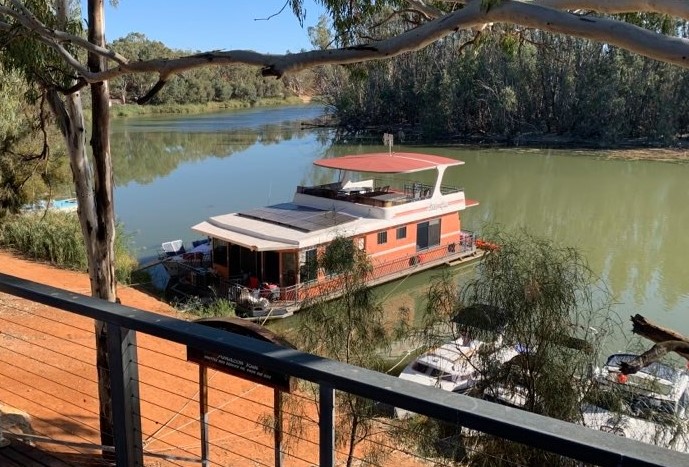 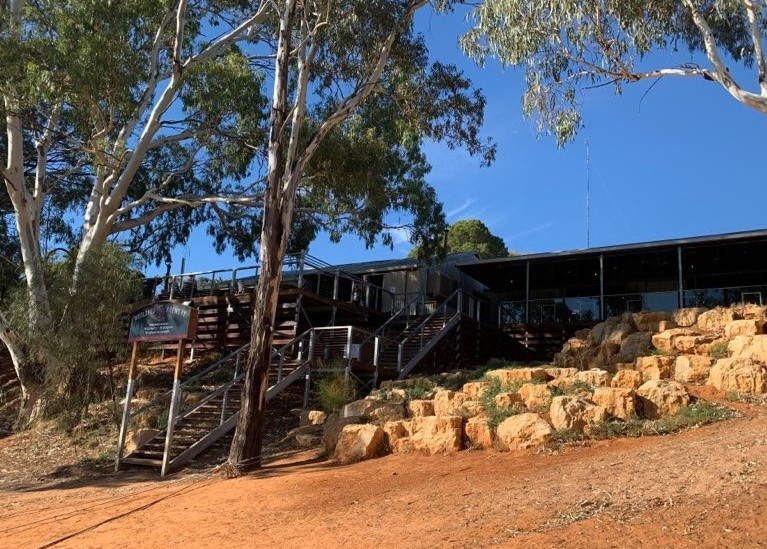 Most members of this group have only minimal experience with alcoholic beverages (Ha! – Ed) so in order to enhance their education, several paddles of the Woolshed’s own beer, alcoholic lemonade and cider were thoughtfully consumed (for purely educational purposes) over a pot-luck lunch at one of the beautiful red-gum slab tables on the balcony overlooking the boats.

Lessons well and truly learned and crews suitably refreshed, the fleet headed upstream towards a mooring close to Chowilla Station about 606 km from the Mouth. Newly acquired skills were exercised at the usual happy hour round a Tania-built fire saw the evening out.

Renie crowned Tania “Queen of Pyromania” for her superb efforts in keeping us all warm. 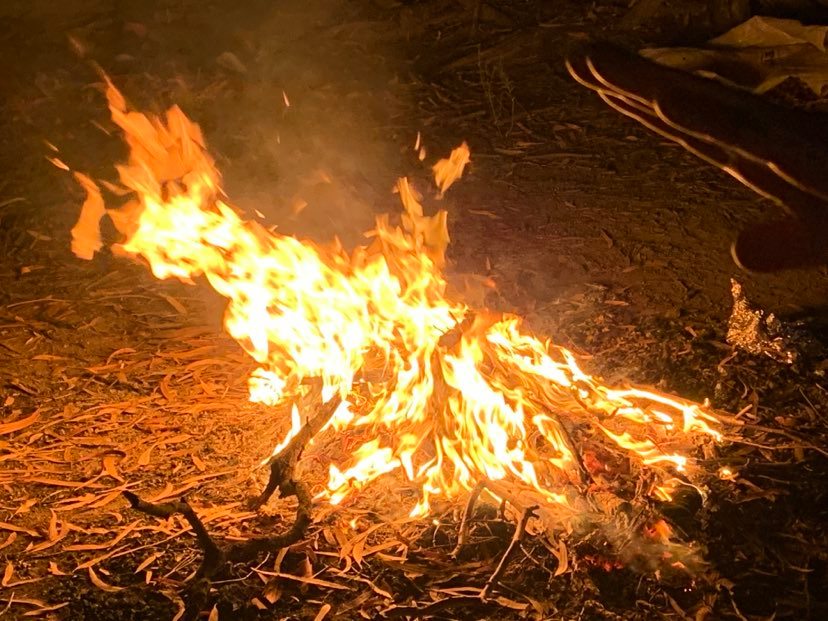 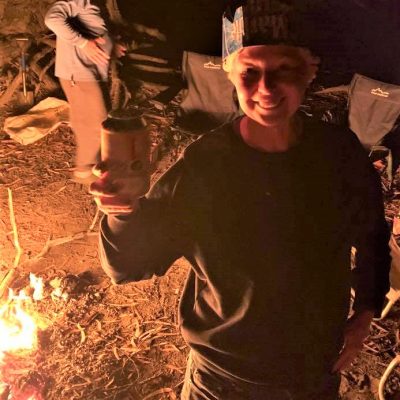 On Thursday, our aim was to transit Lock 6 and motor up to the Customs House at Border Cliffs. After a look around the old Customs station and a brief foray upstream to cross the border between SA and Vic, we turned downstream for the first time, mooring just upstream of the 630 km sign.

The Customs House has a very interesting history,  beginning after the 1850s gold rushes in Victoria and New South Wales, several colonies were looking for additional revenue. New South Wales, who claimed ownership of the River Murray, was first off the mark to charge
customs duties for goods entering that colony.

In January 1884 a government party from South Australia went up the river looking for a suitable site to intercept steamers on the Murray entering South Australian waters.

Having found a suitable site near Chowilla Station, Sub-Collector Robert Baker was put in charge of the site to collect the various charges from the steamer captains. On 8 April 1884 Governor W.C.F. Robinson officially proclaimed the site which was named Port Murthoo.

The contract to build the station was secured by Robert Oldfield. While the buildings were constructed Robert Baker and his familylived in tents and other primitive accommodation. They remained for four years after which Albert Simms took over. The last Customs Officer appointed was Robert Ramsey in 1897. He collected duties until January 1903 when the station was closed.

Nowadays, the Customs House contains a small kiosk selling basic supplies as well as a residence and base office for Murtho Houseboats.

Our group spent a short time buying ice, water and ice-creams before heading back downstream, although a few boats took the opportunity to continue upstream for about a kilometer to cross the SA / Victoria border. 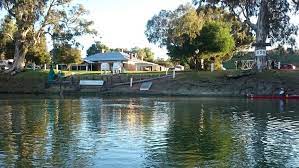 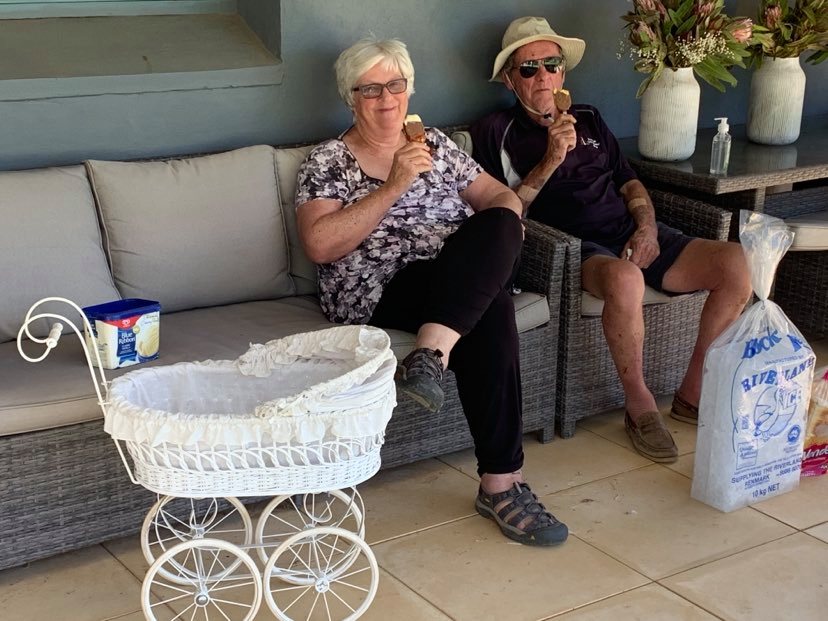 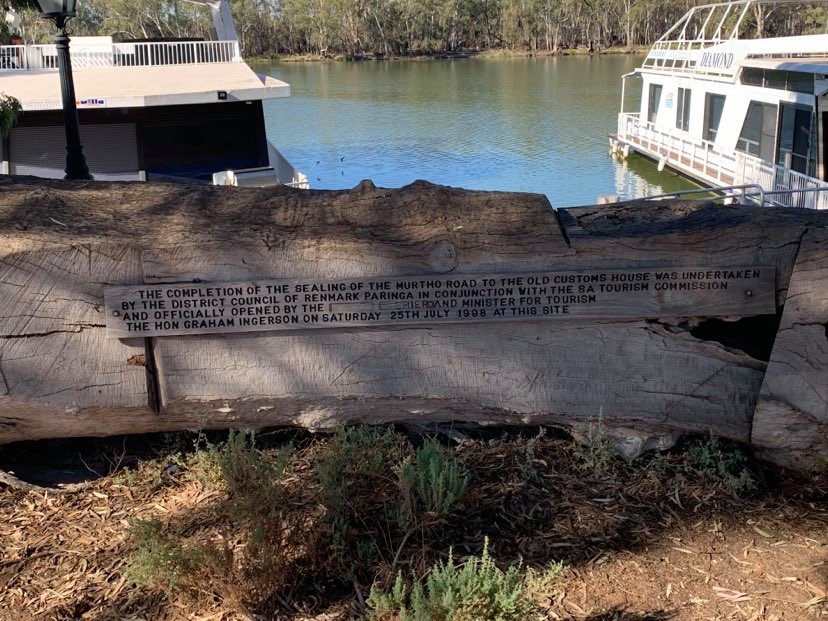 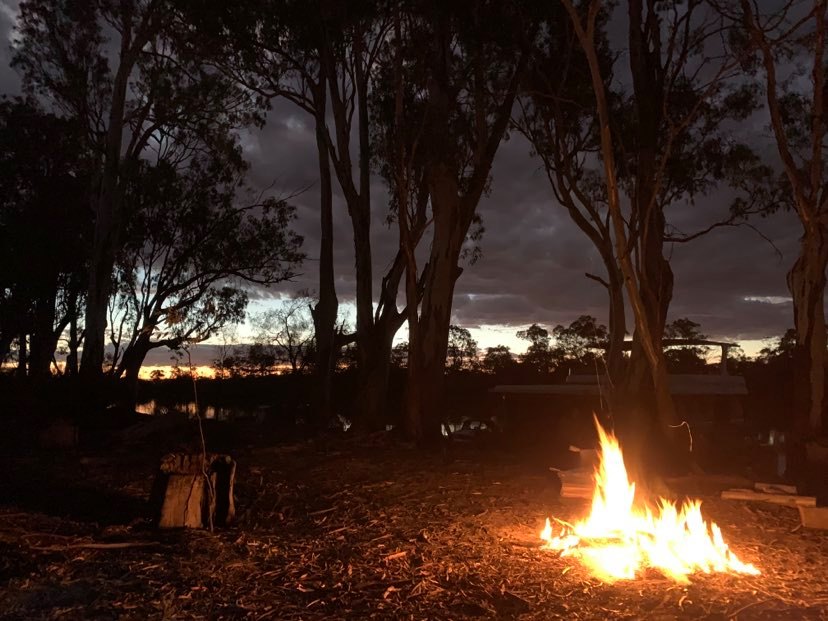 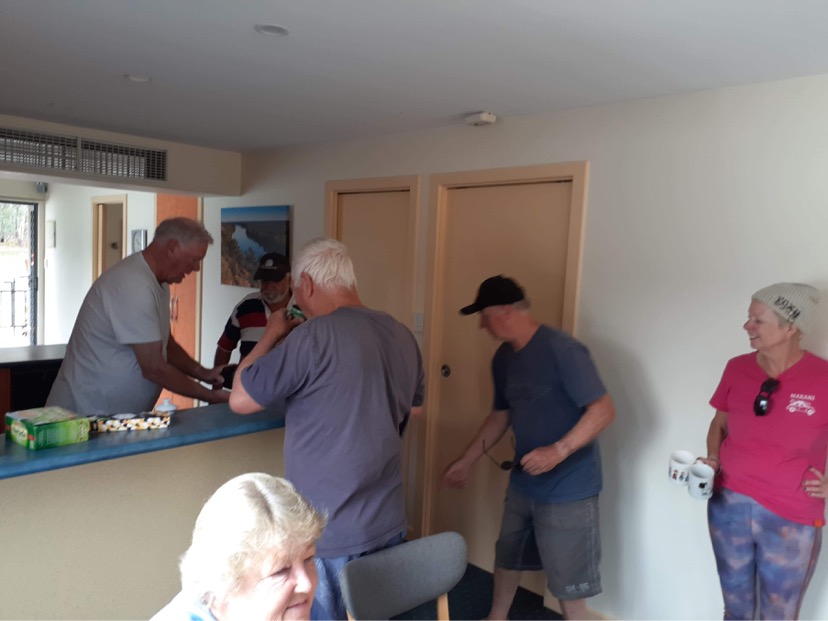 The downstream trip featured another visit the Woolshed brewery before we moored downstream of Hunchee Creek for our final night in the wilderness.

Tania was in her element; everyone had brought firewood from home and were reluctant to carry back home again. As a result, the fire was very warm that night!

Our last pleasant evening was highlighted by a visit, for many of the group, to the warm spa atop ‘Little Gem’s’ roof-deck while ashore, with the backdrop of a majestic sunset reflected perfectly in the still surface of the river,  others sat by the blazing fire for  final conviviality and conversation.

After Rob the Barista had served morning coffees in the ‘Little Gem Cafe’ we moved off downstream for the final leg to the moorings outside of the Renmark Club.

Happy hour on the top-deck accompanied by Chook Man’s ‘Tennessee Waltz’ preceded our final celebratory dinner at the Club where a small party of young women were celebrating the 17th birthday of one of their number. We joined in the ‘Happy Birthday’ singing and they shared a box of birthday cookies with us. A sweet ending to the evening.

Next morning, ‘Cafe Little Gem’ opened early and closed promptly at 0830 to allow a departure from the Wharf that would enable a 0930 transit through paringa Bridge and the return of ‘Little Gem’. Others recovered boats at the Big 4 ramp while Alison and Ray tried out the Bert Dix Boat Ramp below Paringa Bridge.

Brian and Tania and Ric and Al were continuing on downstream to Berri via Lock 5. Lucky ducks!

Ratty managed to sneak into a bag of firewood in Nick Steyn’s shed at Clayton.

It’s unclear whether Ratty has returned to clayton or whether he’s still cruising the river.

Gavin: “There isn’t a tree where Brian wants a tree to be!’

Tanya? or someone else: “Brian will plant one and we’ll come back in 10 years.”

“Tania’s going for a walk.”

Someone else: “Tania. You can come back now!” (Blasé now secured) 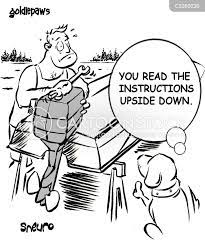 Brian trying to work out what’s wrong with motor

As someone heading to bush with a shovel 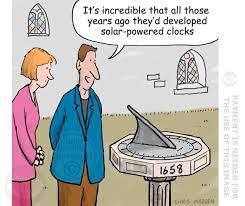 Ray and Alison emerging from Optimist to join group around fire, having eaten their tea.

Ric and Al’s famous rainbow flag, came adrift from the stern of “Bad Dolly” as they hooned off downriver to heat up the water for a shower!

Blasē picked it up from the water and promptly ransomed it! 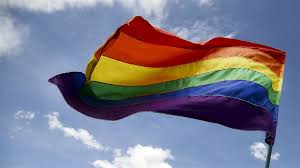 Reflections on the river:-